Guys, it’s time for a heart-to-heart… Cricut vs. Silhouette? Where do you stand? Are you confused? It’s no secret that I have been pro Silhouette for years and my heart was torn when the new Cricut Explore came out a few years ago. I’ve taken my time. I’ve used various machines from both companies. I’ve chatted with the CEOs of both companies, spent time with their employees, and trained with both. Today, I am finally ready to put the two machines to the test! 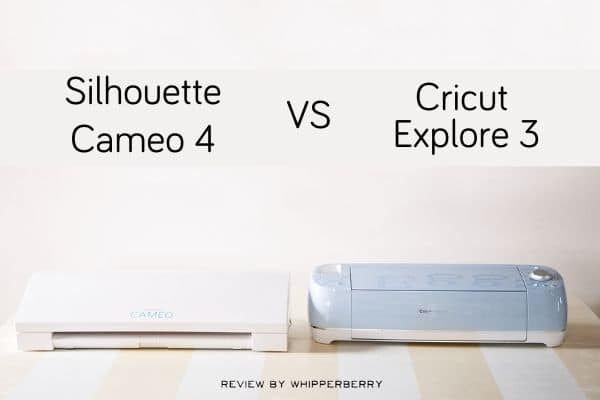 I have always been obsessed with cutting tools. The minute the very first Cricut came out I ran out and purchased one. This was back in the scrapbooking hay-day. I spent so much money on those darn little cartridges and very quickly was fed up with the whole system. It was hard to use and not cost-effective at all.

Fast forward a few years and the Silhouette personal cutting machine jumped onto the scene and created a frenzy among the creative community. It was the new darling and everyone wanted one. I sure did.  I was thrilled with what I could do with my new Silhouette. Fast forward a few more years and Cricut releases the new Cricut Explore to great fanfare and again the creative world went bonkers. (We creative types tend to do that.) I felt unbelievably torn. I had spent so much time working with and sharing the Silhouette machines and I felt quite loyal to the company. I didn’t want to make a hasty or uneducated decision. I didn’t want to feel like I was yanking you back and forth as my followers. That would be truly unfair. I value YOU, your time, and the money you spend on the things that I recommend. With that said, that was a couple of years ago,  I am now finally ready for a good head-to-head review to give you my thoughts and observations.

First off we will be looking at the latest machines from both companies. The Silhouette CAMEO 4 & the Cricut Explore 3. I’m working on the same project with both machines. However, I am using the Silhouette Premium Vinyl with the Silhouette and then the Cricut Premium Outdoor Vinyl for the Cricut. I have some travel mugs that I want to dress up and I thought this would be a good simple project to put these two machines to the test.

Cricut vs Silhouette: A Comparison of the Explore 3 and Cameo 4

Before we jump into the project, I want to discuss a few things about the machine themselves…

First off, the Cricut is more compact and yet has the same cutting width as the Silhouette, 12 inches wide. When the machines are closed, the Cricut Explore 3 is more secure than the Silhouette CAMEO 4. The top of the CAMEO 4 is not secure at all. When you are carrying it around the top lid can swing open and cause issues and heaven forbid it breaks right off when you are carrying it around. You won’t have that issue with the Cricut Explore 3. It’s easy to travel with. The whole machine closes securely and travels and stores easily.

Ease of Use & The Interfaces – Cricut vs Silhouette

Cricut is just so much easier to use. Their design and interface make things so much more beginner-friendly. It’s awful when a beginner gets excited to go out and try their machine and it’s too complicated.

Now that Cricut has the smart dial integrated into the software it’s even easier. The goal for Cricut seems to be that they are always making things easier to use but without getting rid of features and functionality. If you’re new to this it won’t overwhelm you. And, if you’ve been doing this for a while you are sure to have all the functionality you need.

Now, the Silhouette 4 is not that difficult to use. Their machines get better every year but it is still miles behind the Cricut.

The autoblade on the Silhouette makes it a bit more beginner-friendly. Both the Cricut and Silhouette are similar on this though. It’s difficult to mess up your vinyl by cutting too deep or by ripping it.

Cricut was the first to come up with onboard tool storage when they first released the Cricut Explore a few years ago. They also included a cubby to store other items like markers or other tools on the left side of the machine. Silhouette followed the trend by adding tool storage to the CAMEO 4.

The designers at Silhouette added a drawer under the machine that holds three of their main tools. 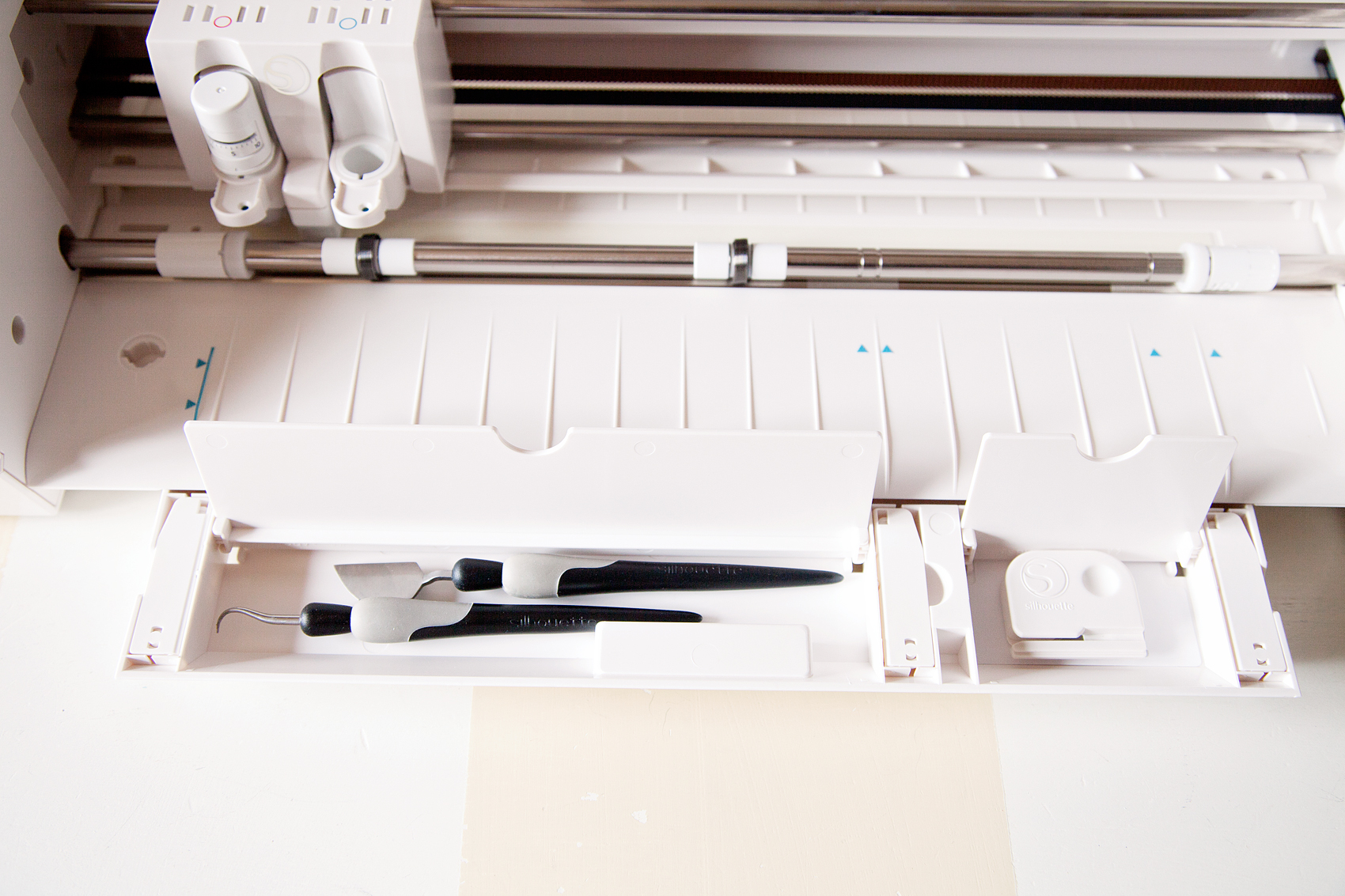 The vinyl hook, spatula, and the handy material cutter. It doesn’t hold anything else. I’m not a fan of the design because it’s awkward to get into it when you are working with the machine. You need both hands to pull out the drawer which sometimes, let’s be honest here, can be a little hairy when you are working on a project. Plus, it’s just too small for my taste. 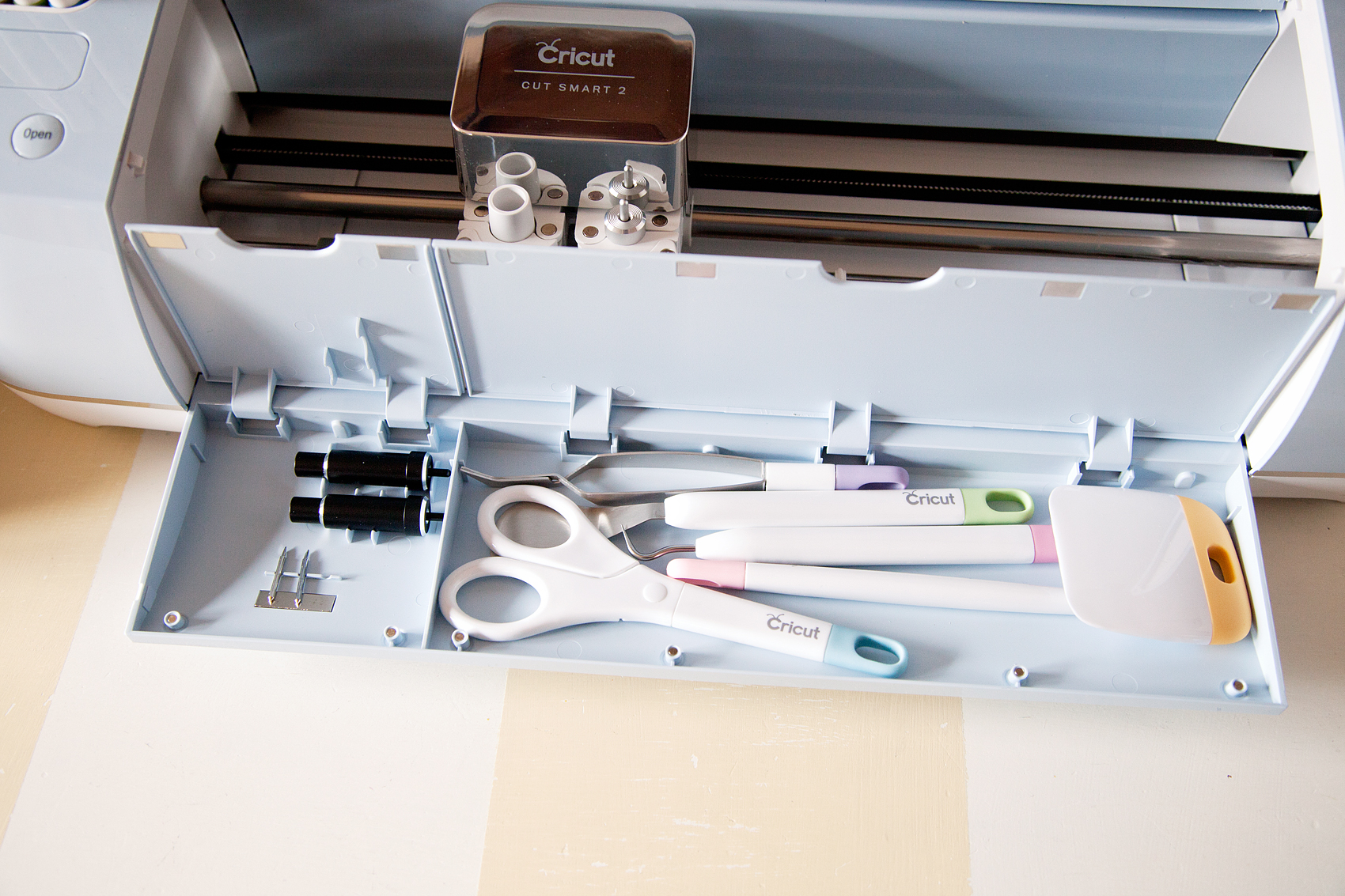 The Cricut Explore 3 has an easy-to-access panel that holds all of the tools (including scissors), cutting blades and blade housing. It’s easy to flip open to get access one-handed when working on your projects.

I have a dirty little secret… In all of the years that I have used the Silhouette, I would buy Cricut cutting mats because they are so much better. GASP! The silhouette cutting mats are flimsy and they are not fun to work with.  Cricut has three kinds of mats for light, medium & heavy materials.

Silhouette CAMEO 4 Put to the Test

Here we go with our head-to-head project with both machines. I started with the CAMEO 4 and recorded the entire process for you…

Are you as shocked as I was? Like I said in the video, this is a brand new Silhouette CAMEO 4 right out of the box. I’m not sure if it was sent with a bad blade or not but, it didn’t work at all. I tried it several times with the same results… SO FRUSTRATING!!
I spent an entire hour trying to connect the Bluetooth so that I could cut wirelessly and you saw how that turned out. Sadly as for the vinyl, I would say that is par for the course. In the past, I usually had to cut the vinyl for my projects a few times because of inconsistent performance from the machine. A real flaw in my book with the Silhouette machines. 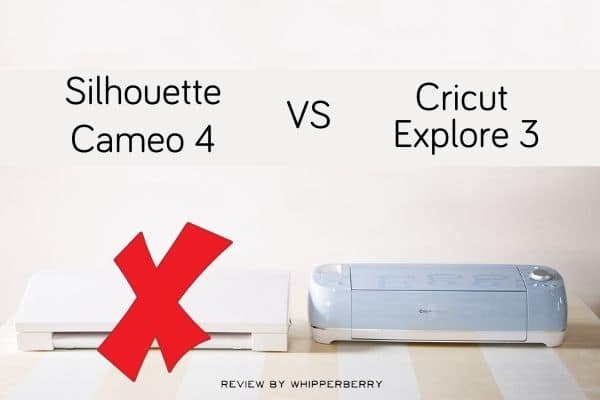 I finally had to abandon the project and move on to try the project with the Cricut Explore 3.

Cricut Explore 3 Put to the Test

Ok, I’m finally ready to declare my love to the world… I LOVE Cricut!! The machine just works BETTER. It’s consistent every single time. I don’t waste money on materials because of missed cuts. It’s more intuitive and therefore much easier to use. The same goes for the software. You can literally pull your machine out of the box, follow the directions at start-up, and have a project completed within the first 30 minutes. I would say that is truly impossible with the CAMEO 4.
Now, I know this is already a monster post but, I’ve put together a simple PROS & CONS list for you to compare. Obviously, I’m keeping things simple. If I detailed everything you would be fast asleep by now, so here are my main observations. 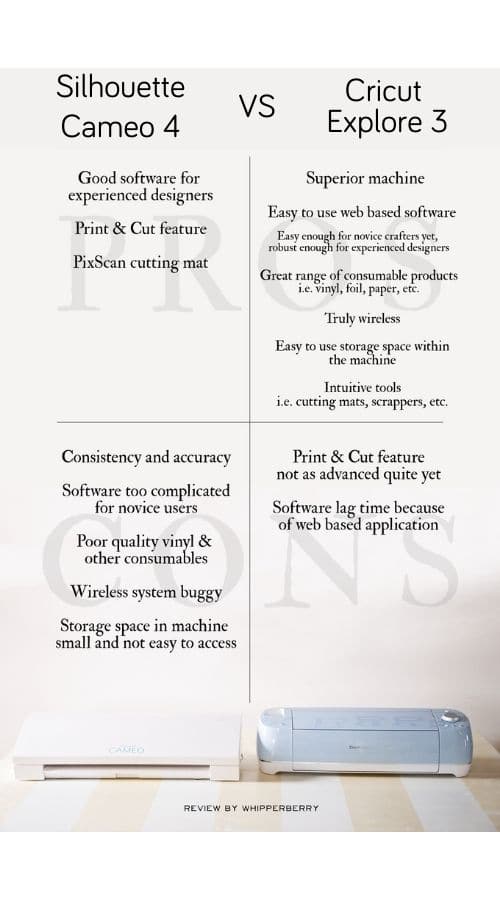 Overall, I would have to say that the Cricut Explore 3, hands-down, won this head-to-head contest!
After years of fretting over this decision, the proof is in the pudding. I only managed to complete my travel mugs with the superior performance of the Cricut Explore 3. 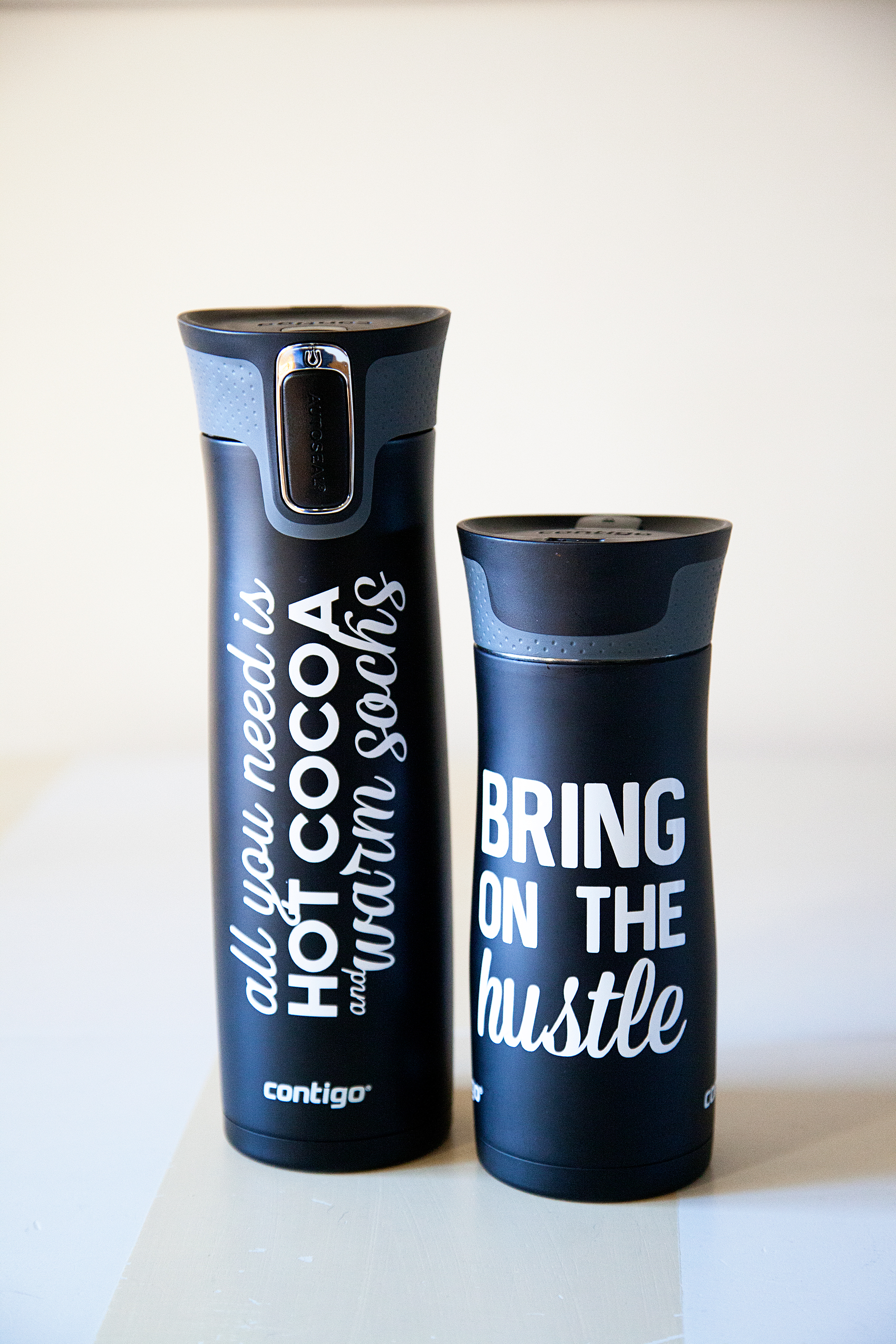 Now that I’ve put everything to the test and have finally decided, after years, what personal cutting machine will be the official cutting machine of WhipperBerry… I’m finally thrilled to announce that CRICUT has won my heart. With that, I have a little teaser about a fun project that I’ve worked on with Cricut and Hayneedle…

I can’t wait to show you! That will be coming up soon, so stay tuned.

Now I know this can be a controversial opinion overall. After all, the Cricut vs Silhouette debate is kind of like Apple vs Samsung or similar. But, everyone has their opinions right? By the way, if you have any questions or concerns about either the Cricut or Silhouette feel free to leave a comment. I would be happy to chat with you!