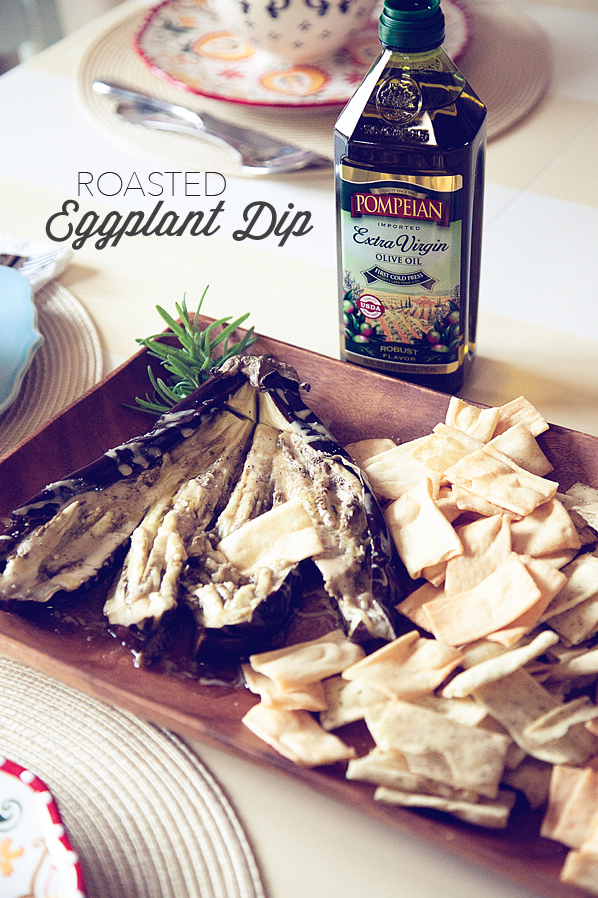 Last fall I went on a trip of a lifetime… I joined a handful of bloggers as we traveled to Israel for an amazing food tour called the Taste of Israel.  I shared a little of my experience in my post about zucchini hummus, you should check it out.

Today, I have another recipe that came from my Israel travels, Roasted Eggplant Dip.

If you are an eggplant fan, this dip is amazing! We learned all about it while spending the afternoon at the Dan Gourmet School of Kosher Culinary Arts. We had the pleasure to learn a few little tips and tricks from the director of the school Chef Amir Ilan. 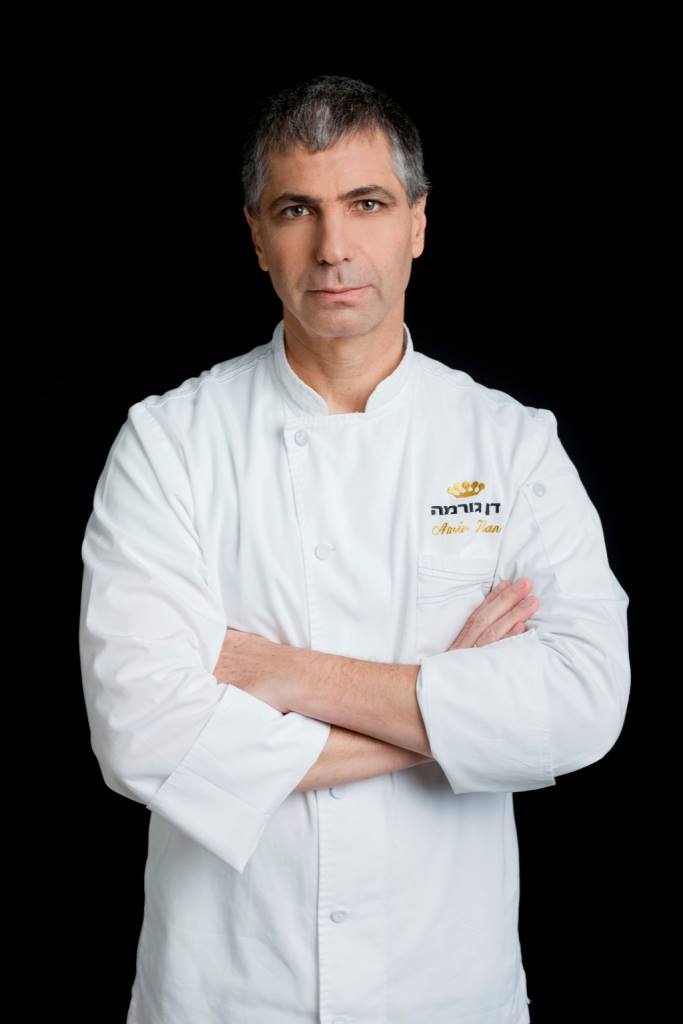 I wish I could spend an entire week shadowing Chef Ilan. This man is amazing and his passion for teaching the culinary arts comes through in his work. When we first arrived in his kitchen he placed several eggplants directing on the gas burner and we just sat and watched them char as he taught us about the school. 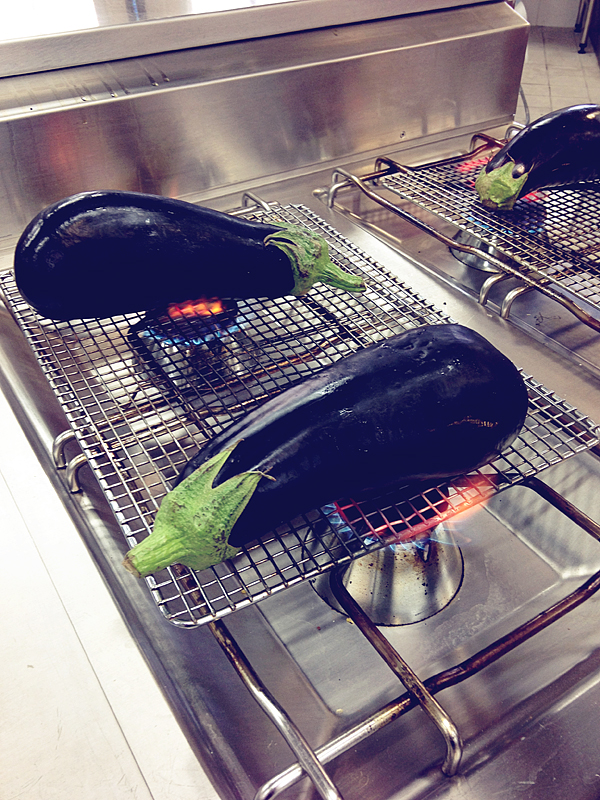 Once the eggplants were fully charred, he removed them from the flame and then we, or shall I say, Kevin from Closet Cooking removed the charred skin. Then Chef Ilan cut the eggplant down the middle opening up the soft flesh, he salted it lightly, and added some prepared tahini, drizzled with a nice full bodied olive oil and that was it! 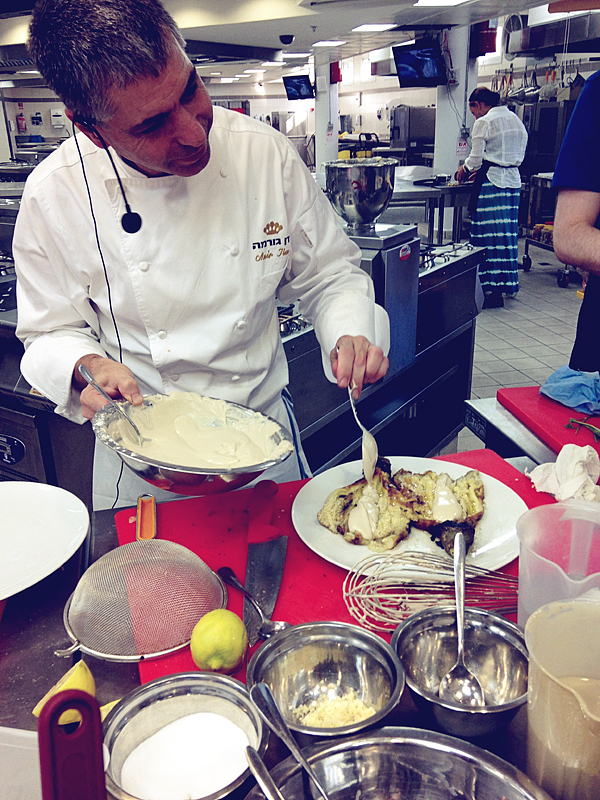 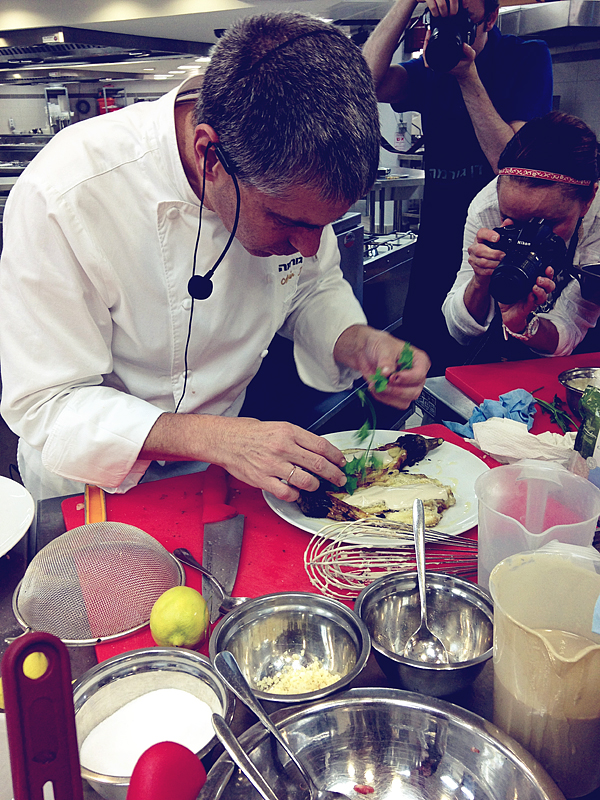 There’s Kevin and Ally from Ally’s Kitchen in the background snapping photos.

That was it! Just a simple eggplant some seasoning and a flavorful olive oil! Our hosts told us that this is an appetizer that is on almost every Israeli table when they entertain or have family over. Mainly because of the ease of  the dish, but the flavors are divine as well. 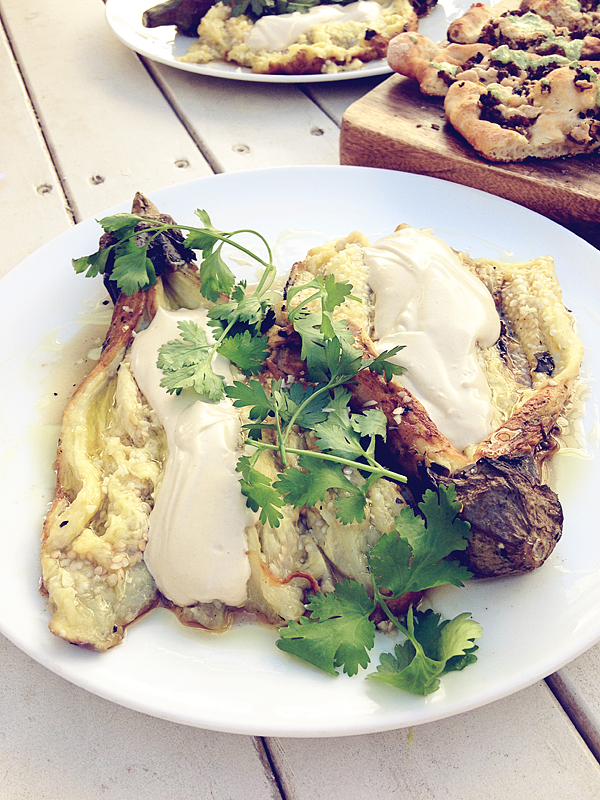 You serve it with bread or pita and it’s lovely!

I thought with the Holidays upon us and the season of entertaining, this would be a great addition to your family table as well.

All you need is an eggplant or two. I don’t have a gas stove at my house (so sad, I know) and it’s to cold to grill right now here in Lincoln, I thought I would just roast my eggplant in the oven.

First, I washed and pierced my eggplant a couple of times and then just placed them in a 425˚ oven on a baking sheet… 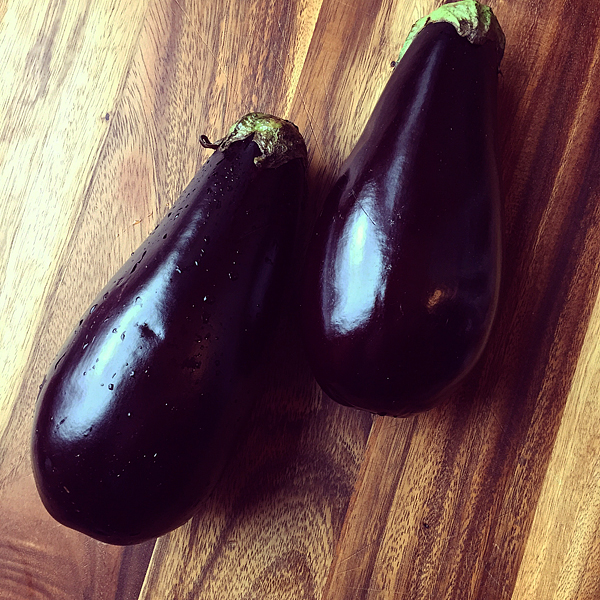 After about 25-30 remove your eggplant and let cool for a few minutes.  They come out looking rather sad, but trust me, they taste amazing when you are finished! 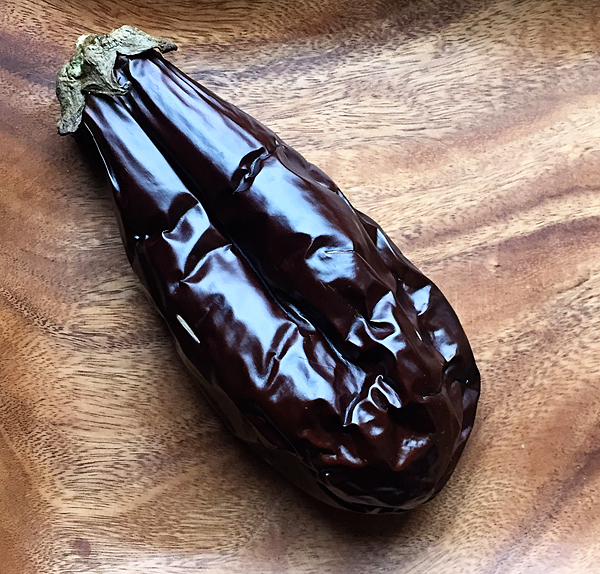 Now because the skin isn’t charred, you can skip the step of removing the skin. I just cut it into quarters, leaving the top intact. 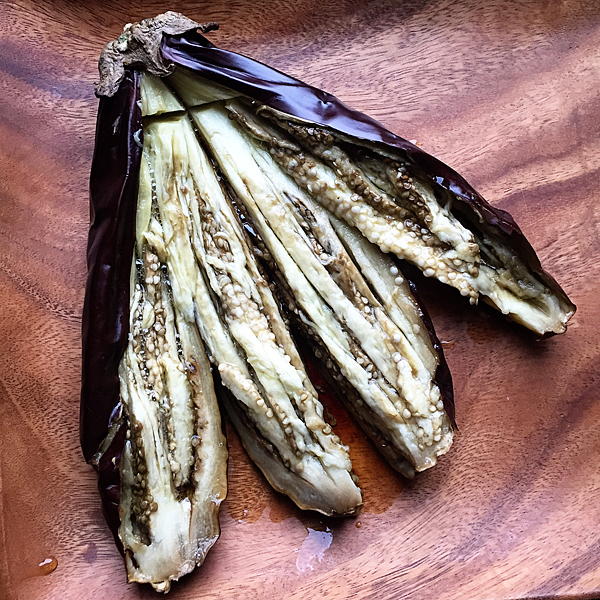 Fan it out like so. Next, lightly salt the flesh of the eggplant. I then lightly drizzled some tahini sauce onto the eggplant. Tahini is a sesame paste that is made out of pressed sesame seeds. It’s well known for it’s role in Hummus, but’s it’s fantastic in all kinds of applications.

I then drizzled the eggplant with a lovely full-bodied Extra Virgin Olive Oil from Pompeian. 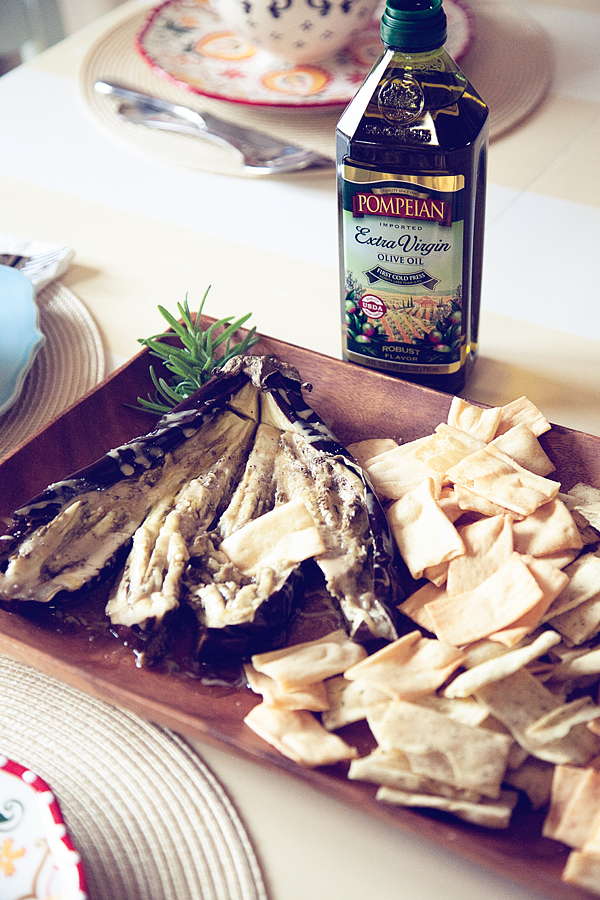 In the Middle East and Mediterranean countries, olive oil is way more than an oil to cook with. It’s more of a comment as well. When you are using it as a dip or dressing, you want to make sure you are using a GOOD olive oil that is rich and flavorful like the robust flavor of the Pompeian Extra Virgin Olive Oil. I drizzle it right only my eggplant, add some pita chips and serve. Your guest scoop the dip right out of the eggplant, it couldn’t be simpler than that!

The flavors of the soft eggplant, the tahini & the olive oil are amazing! If you are an eggplant lover you should give this a try.

Disclaimer // This post is sponsored by Pompeian. I received product and payment for my recipe development.